We support the creation of deeply affordable senior housing on the Bergen and Dean HPD sites.

As members of a community already heavily impacted by massive redevelopment, we deserve a broad holistic review of any zoning changes on the HPD sites, to be conducted in the context of the larger M-Crown rezoning effort.

It feels dismissive to ask for “community input” on a project when the City may already have a clear idea of what will be in the RFP and the extent of the rezoning. See Figure 1. 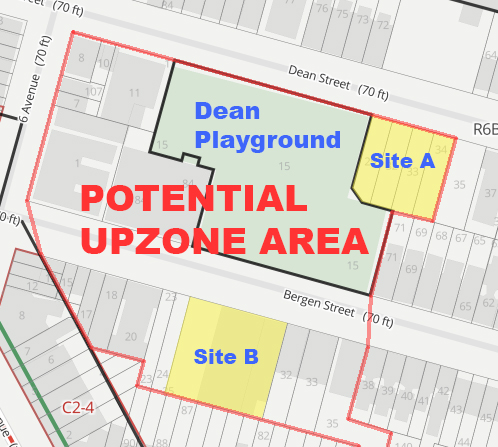 HPD’s simple conclusion that City ownership of the land makes it a logical place to enable dense development, disrespects current residents.  Our neighborhood already hosts some of the most concentrated residential development in the entire City, including 6,430 units of new housing.  Of those units, 2,250 are slated to be affordable housing, with 10% of that for seniors.

Pacific Park and other new residential development in the neighborhood will mean over 13,000 additional residents in less than five city blocks.  We will be one of the most densely populated census tracts in the entire United States.  See Figure 2. 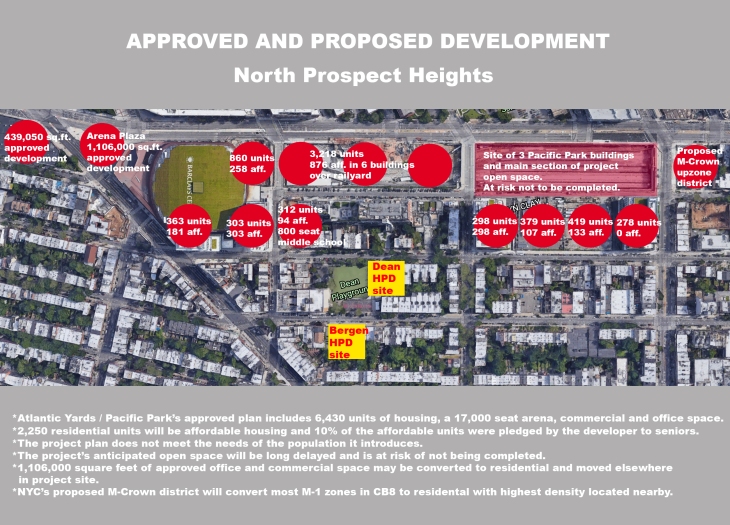 Existing studies already anticipate shortfalls in our infrastructure, and any rezoning that allows additional large-scale development will mean further adverse infrastructure impacts and potential further displacement of existing rent subsidized tenants.  We have already experienced a consistent failure of City agencies to adequately address these problems.

Developing 516 Bergen Street and 542 Dean Street for affordable housing are public realm improvements associated with the M-Crown proposal.  We concur with Winston Von Engel, Director of the Brooklyn Office for the NYC DCP, speaking to CB8’s Land Use Committee in August 2020 when DCP paused the rest of the M-Crown plan :

“… we heard concerns about rezoning increasing density.  Those are reasonable questions and concerns; questions about population changes taking place.  Those are things we believe we lookin into further and you deserve answers on everyone’s part; before we go forward there ought to be at least these issues discussed, a full discussion.”

Our area hosts much of the new development in the CB8 District.   Proceeding forward without a full vetting of concerns and opportunities is urban planning malpractice and a deep disservice to local citizens.

Tell the city we need a holistic plan for our area.  Please reach out to us at northprospectheights@gmail.com.

There is a need to create affordable homes for seniors in our neighborhood.  Help us achieve this goal in a way that aligns with the needs of our whole community.